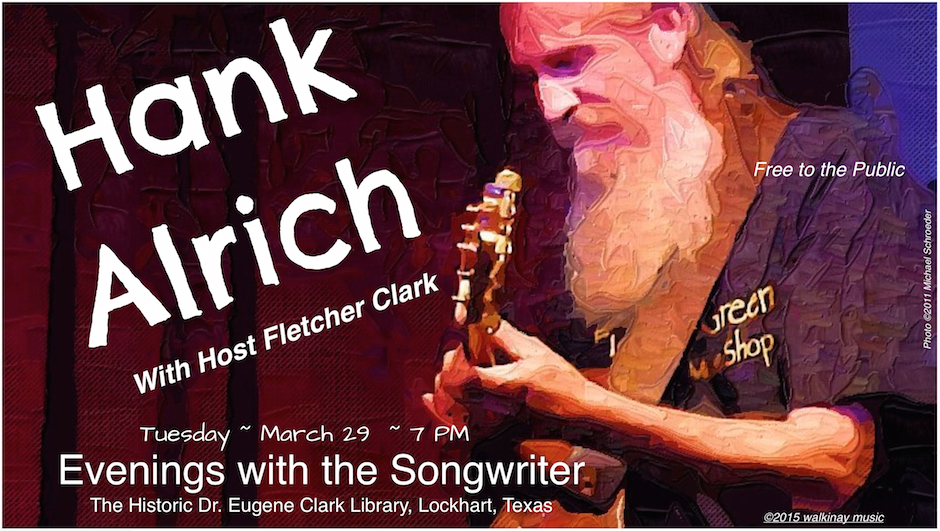 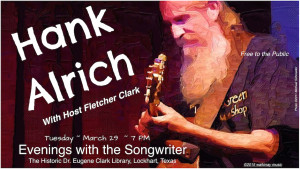 In 2016 Fletcher Clark‘s outstanding series, Evenings with the Songwriter, celebrates its sixth season, riding high on a stream of outstanding composers. Hank and Shaidri were the first songwriters invited to start this series of programs that would lead Fletcher through dances of delight and fits of frustration. At one point he thought he’d throw in the towel. That’s when out at Kerrville Freebo told Fletcher he couldn’t quit because Freebo was going to play it. That was a marvelous turning point, and since then it’s been one success after another.

Needless to say, Hank is delighted to return, with a large bucket of material composed since that first session. The songs cover a wide range of human realities, with a love song here and there, and a raft of what Hank calls “biospherical songs”, stories that touch on our human condition and the plight of our planet. None of this is couched in pejorative or pedant terms. Hank’s Muse has become very sneaky in the way she brings her tales to the table. At the same time, She keeps finding humor in reality.

The historic Dr. Eugene Clark Library is the oldest continuously operating public library in the state of Texas. These sessions are set in the original building, with performers up on the lovely stage. Seeing this makes clear that at one time in our history oratory was practiced regularly. The acoustics reward this type of music, and never has anyone seen a more attentive audience.

All of this for nothing more than showing up to listen. These shows are free to the public.